Agalta Protocol: A Layer 2 solution with the best overall performance

Since its invention in 2016, Ethereum has become the most active and busiest blockchain network after years of repaid development. It is the undisputed NO.1 public chain in all perspectives, including the richness of ecology applications, on-chain assets scale, token security, and other core indicators.

In 2021, with the emerging of the digital currency bull market in the past few months, the transaction frequency of digital currencies deployed in the Ethereum network increased massively, resulting in a significant increase in network usage, especially the bursting in the DeFi area. This makes a desperate lack of the original throughput.

For a long time, the entire crypto community has been working hard to solve the throughput and high gas fees problem of Ethereum. One of the major solutions in Ethereum 2.0, which will increase TPS greatly. But is it possible to fix this from another perspective? The answer is yes, it is Layer 2.

As we all know, the biggest weakness of ETH is the performance. ETH uses full nodes, which led to low speed and congestion during transactions. ETH came up with the solution of sharding to improve its performance, means to divide Ethereum blockchain into several shards, put nodes in different shard to participate in accounting and consensus. After sharding, Ethereum becomes a number of relatively smaller blockchains, and the amount of nodes on each shard is significantly reduced. Thus improve work efficiency greatly.

However, sharding based on the current situation causes great challenges for development and upgrades, as Ethereum is working constantly every day and already has a lot of nodes and data. 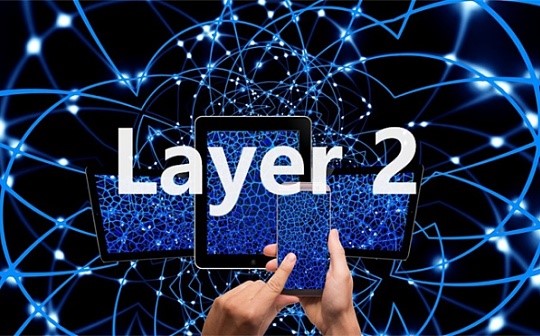 What is Layer 2? Literally, it refers to the second layer of the network. The logic is to transfer and process transactions from Ethereum’s main chain Layer 1 (L1) to Layer 2( L2), then send results back to Layer 1 for confirmation. We call this solution Ethereum Layer 2.

Simply put, Layer 2 develops another blockchain outside the Ethereum main chain, transfers transactions on Ethereum to Layer 2 for further processing, and sends results or briefing back to the Ethereum blockchain. The theoretical TPS of L2 reaches 2000-4000, which surpasses Visa's processing capacity-1700 transactions per second. Therefore, many people believe that the L2 solution is the hope for Ethereum to win the future.

At present, Layer 2 ecological construction has been carried out in full force, and design schemes in different types have received support from a certain amount of community users. However, the trilemma (i.e. decentralization, security, and scalability, only two options are achievable) remains an unavoidable issue for most schemes. However, Agalta Protocol provides another thinking to solve this for the market.

Agalta is a decentralized cross-chain protocol featured by its high speed, security, and reliability. It is one of the first expansion protocols that support Ethereum, and can efficiently solve the congestion and high gas fees problems of Ethereum. Through side-chain expansion technology, Agalata extends the internet to existing and future blockchain, Agalta helps developers to build Dapp quickly, and carry out large-scale commercial applications.

Agalta Protocol is committed to the construction of the public chain Layer-2 cross-chain DeFi ecosystem, will launch multi-chain cross-chain research and development plan as scheduled, and gradually open Layer-2 high-speed cross-chain network of Binance Smart Chain, Huobi Eco-Chain, Polkadot Main Chain, OKT, and other public chains. As well as the enterprise development toolkit. One-click fork of Defi projects and products on Ethereum will also be available here. And Agalata will become a cornerstone of the global public chain Defi eco-system.

In today’s market, Layer 2 solutions like Rollup and State Channel are emerging, including some repetitive functions. Many investors tend to be speculators and ignore some common problems of projects. For example, in the economic model of Optimistic Rollup Protocol, each batch sequencer of epoch needs a smart contract called a bond administrator to be marked as collateral. To become a collateral sequencer, a fixed amount of ETH has to be added to the contract. This economic model can prevent the sequencer from becoming abnormal, but it does not fix the potential risk that the verifier may try to send a large number of fraud proofs to the blockchain in different batches (Forcing a large amount of L1 calculations ).

Celer, a representative project of the State Channel. Even though the side chain channel in its network can significantly reduce the required collateral deposit, it still has to be proportional to channel numbers and replay capacity of a singal channel (such as payment). This requires massive liquidity in Celer network to ensure normal running of the State Channel. Besides, usually, the State Channel requires users from both sides to be online all the time, otherwise, fairness and security cannot be guaranteed. This kind of availability lack ness limits State Channel’s application greatly.

Agalta Protocol carried out in-depth research and innovation to solve the common problems mentioned above. And proposed a new generation of Layer 2 Agalta solution: namely, a high-performance cross-chain Protocol that supports multi-chain ecology. Specifically, it has the following highlights.

As shown in the table, Agalta Protocol stands out among many projects with excellent overall performance. It is very suitable as the best L2 solution that supports high-performance applications under the main net Ethereum L1.

We have enough reason to believe that the landing of Layer 2 and Ethereum 2.0 will have the chance to become an important fuel for the second expansion of the Ethereum market. And this will eventually make Ethereum a financial giant with over one trillion US dollars. In the future, Agalta Protocol will play a major role in L2 ecosystem construction and develop an important infrastructure of the global blockchain, let’s witness the history together.

This is a paid press release. Bl4nkcode does not endorse and is not responsible for or liable for any content, advertising, products or any other materials on this page. Readers should do their own research before investing funds in any company mentioned. Bl4nkcode is not responsible, directly or indirectly, for any damage or loss caused or alleged to be caused by or in connection with the use of or reliance on any content, goods or services mentioned in the press release