There are some critical differences between Ethereum vs. Bitcoin mining, which originate from the fact that these two cryptocurrencies developed with very different purposes in mind. At first glance, it may be difficult to determine the variances between these cryptos, but dig a little deeper, and you discover a glaring contrast between them. Let’s take a moment to discuss the critical differences between these cryptos and how they affect the Ethereum vs. Bitcoin mining processes.

Bitcoin is a decentralized peer-to-peer electronic cash system as described by Satoshi Nakamoto, the cryptocurrency’s anonymous creator. The protocol functions by utilizing a mathematical equation that adds blocks to a chain of transactions known as a blockchain. Each block uses a hash code from the previous block to timestamp the newly added block.

Blocks are added to the blockchain every ten minutes via miners who compete against each other to figure out a mathematical equation (SHA-256) whose answer must begin with four zeroes. The process requires extensive computer processing power, which equates to electrical usage. The first miner to discover a suitable solution to the equation receives an award of 12 BTC.

Every miner (node) on the blockchain works together to ensure the longest chain of transactions is the valid chain. As long as fifty-one percent of the nodes are honest, the blockchain remains honest. The act of validating the chain is called consensus. This proof-of-work system is at the core of Bitcoin’s protocol.

Bitcoin utilizes the unspent transaction output (UTXO) scheme to eliminate double spending on the network and track the database. In this protocol, users don’t send Bitcoin during their transaction. Instead, what they are sending is the hash of the previous block, digitally signed, and the public key of the new owner.

In essence, Bitcoin holders don’t hold their Bitcoin per say. In the Bitcoin UTXO blockchain protocol, users keep the output to a specific number of tokens, which can be signed over to a new owner to transfer control over the Bitcoin. If this sounds confusing, let’s examine the three basic rules of this protocol to get a better understanding.

These rules mean that every Bitcoin transaction must have both inputs and outputs to be completed. The only time this is not the case is during the creation of a new Bitcoin during the mining process. This transaction will only have outputs and is known as the Coinbase transaction.

Bitcoin mining difficulty increased significantly over the last two years as a result of added hash power on the network. Bitcoin network difficulty is adjusted to compensate for increased hash power in order to ensure block times remain consistent at around ten minutes. 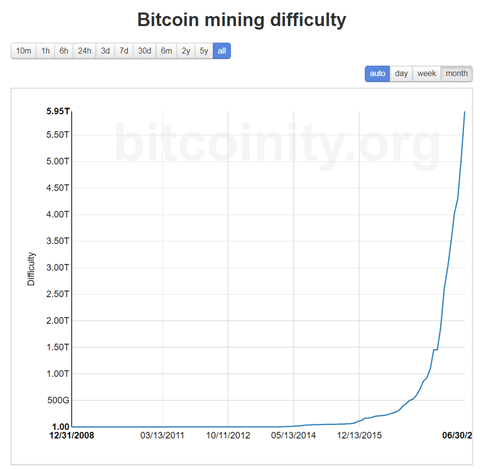 These hardware advancements increased the difficulty and start-up costs required to mine Bitcoin. You will need an ASIC miner to be competitive in today’s mining conditions. Also, you will want to join a mining pool. Mining pools leverage your efforts by combining the computing power of the entire pool.  A miner’s contribution level determines their mining rewards.

Ethereum differs from Bitcoin in many aspects. For one, Ethereum is a centralized software platform. Unlike Bitcoin, Ethereum has a central office and a well-known founder, Vitalik Buterin. Ethereum supports a dual account structure where both private key, controlled, and contract-code accounts exist, the latter being known as smart contracts.

ERC-20 has become the primary token creation protocol in the crypto space, while, ERC-721 continues to see adoption thanks to an increase in the tokenization of both digital and real-world assets. The main difference between the two is that ERC-20 tokens are fungible.

How Does Ethereum Mining Work?

The primary functions behind Ethereum’s mining process are the same as Bitcoin. Nodes compete against each other to complete a mathematical equation. The node to add the next block to the blockchain receives a reward of around 3.5 ETH. A block is attached to the ETH blockchain every 14-16 seconds.

Ethereum utilizes the ethash mining algorithm rather than the SHA-256 algorithm found in Bitcoin’s mining process. Both mining processes use proof-of-work systems. Consequently, both cryptos consume large amounts of electricity when mined.

Ethereum employs a more simplistic and familiar approach to the problem of double spending.  Transactions tracking operates similarly to traditional bank accounts. Unlike Bitcoin, Ethereum users are sending their tokens and not just signature hash inputs. This difference means that each Ethereum account experiences information and direct value transfers with each transaction.

There are a few reasons why Ethereum chose this protocol over Bitcoin’s UTXO blockchain version. For one, account-based protocols are only possible when you have centralization. Ethereum’s development team ensures that when a person sends ETH that they have the token in their wallet before they send transaction request approval.

This centralization also means that the developers could void, refund, and reverse transactions if they feel the need to do so. They already showed this ability during a decentralized autonomous organization (DAO) hack on June 17th, 2016. In this incident, developers refunded fifty million in stolen Ethereum by initiating a hard fork thereby creating Ethereum Classic (ETC) and Ethereum (ETH).

Ethereum miners experienced increased hash rate since 2016, but nothing even close to Bitcoin’s numbers. Ethereum is still mined using graphics processing unit (GPU) miners. While these devices are far more powerful than central processing units (CPUs), they can’t compare to the capabilities of ASIC miners.

GPU miners have some distinct advantages and disadvantages when compared to ASIC miners. GPU miners can mine multiple cryptocurrencies, regardless of their hash algorithm. For many miners, this flexibility is paramount to their mining strategy. GPU miners are much cheaper than ASIC mining rigs, but they are lacking in performance capabilities. Additionally, GPUs are not standalone devices; whereas ASIC mining rigs usually require only a power supply.

Ethereum developers announced that in the coming months they plan to move away from the proof-of-work system and institute a proof-of-stake system for mining. The main difference between the two is that the latter doesn’t require expensive hardware or massive computing power. Users stake their coins in their wallets on the blockchain to receive a reward based on the number of coins you hold.

This decision to change to a proof-of-stake protocol helps reduce centralization on the blockchain. Five mining pools dominate the Ethereum mining sectors currently. According to recent reports Ethermine, f2pool_2, and ethfans.org are responsible for 85 percent of the Ethereum network’s hash rate. 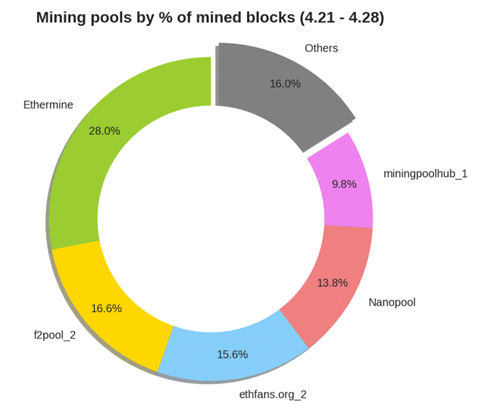 These changes will reshape the reward system for Ethereum miners. Developers intend to create a hybrid system until the conversion to proof-of-stake is complete. This hybrid will allow miners to opt into the changes as the network implements these changes slowly.

It is difficult to compose a legitimate Ethereum vs. Bitcoin mining profitability comparison because there are so many factors to consider. Both cryptocurrencies will require a substantial investment to start up a mining operation.

You should take into account the fact that Bitcoin is much scarcer than Ethereum. This scarcity could result in substantial gains in the value of Bitcoin in the future. However, Ethereum serves a unique purpose in the crypto space, and both their ERC-20 and ERC-712 protocols are the backbone of the majority of the tokens in the marketplace. This dependency could lead to a scenario where Ethereum overtakes Bitcoin regarding total market capitalization in the coming years.

Now that you have a better understanding of the key differences between Ethereum and Bitcoin, you‘re ready to start researching hardware prices and calculating your profitability.

This article by  David Hamilton was originally posted on Coincentral.com and has been republished here with permission.